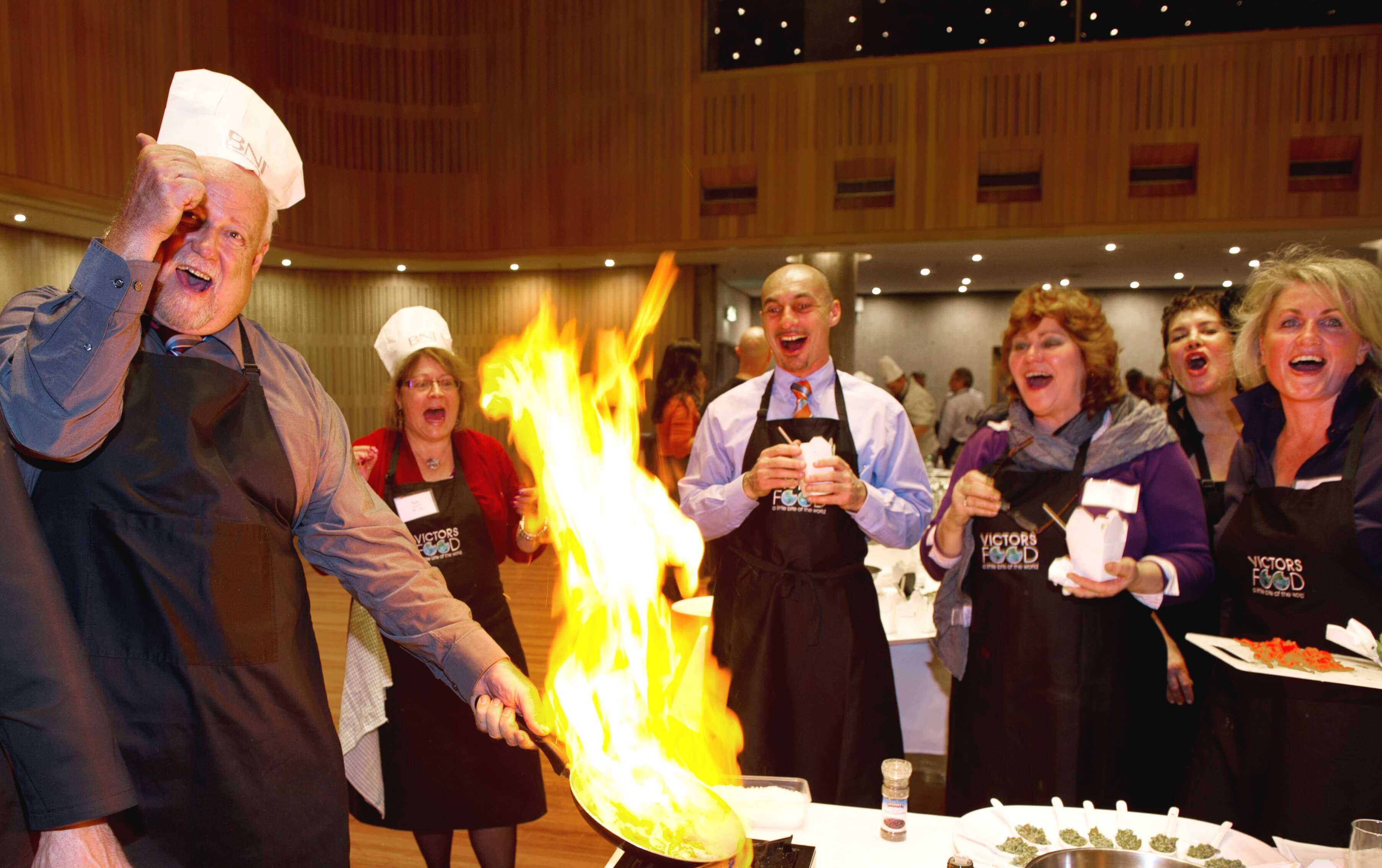 15 Apr Why Cooking and Eating Together Matters

Posted at 10:02h in Corporate Team Building by Alex 0 Comments

Our blogs over the past several months about how “cooking made us human” and how innovation started with cooking have attracted some good interest and thoughtful comment. As part of this conversation, we offer the blog below, contributed by Jenni Hogg, presenting a broad view of the importance of cooking and eating together through human history and across cultures.
_____________________________________

The ability to cook is a key part of what sets us apart as humans. In our early history, it helped us to feed bigger brains and brought us together into more complex societies, but the impact of cookery did not end here. Since the first time one of us thought to use fire to make a meal more appetising, we have enjoyed a long history in which cooking and eating together has played an important role.

Eating alone is relatively common today, with 60% of Australian families snacking in front of the TV rather than sitting down together, according to the Sydney Morning Herald. However, many of us still hold on to the idea that it is better for the family to dine around the table, and that eating out in a restaurant is more enjoyable when we have someone there to share the experience. Evidence for the fact that we still see food as something to share can even be seen online, where we can find endless photographs of carefully presented platefuls, and detailed reviews of places where people have eaten out. We don’t just enjoy having company during a meal, we also like to have someone to discuss the experience with afterwards. Food is one of those universal topics that can always provide fuel for a conversation.

One reason for this is that, as Valore Books explains, cookery is a subject that we all think we know something about. At the same time it is also one that can always teach us something new, whether it is a twist on an old recipe, a better technique for preparing a favourite dish, or the chance to try an unexpected taste from another part of the world. Eating has remained a shared experience, but it is one that is always changing, giving us a reason to talk about food. Even when we dine apart, we write tweets, blogs or books about it, or simply tell our friends about that great new restaurant that just opened in our neighbourhood. This is why food is just as effective a tool for teambuilding today as it was for bringing together communities and cultures in the past.

The Importance of Hospitality

The position of food at the heart of our communities can be traced back over thousands of years. It is particularly clear in Ancient Greek mythology, where the relationship between a host and their guest could form a bond that would last for years. A host was expected to provide food and shelter, even to a stranger, while the guest was supposed to show respect and offer a gift in return. In a time when travel was dangerous, such hospitality was essential for long journeys. It also reflected the belief that the gods could disguise themselves and walk among us. Failing to care for a visiting stranger might mean incurring the wrath of a disguised god. Many cultures from around the world share the belief of the Ancient Greeks that a stranger should always be treated as a guest, and that this bond, once formed, must not be broken. To treat someone badly after having shared a meal was often considered scandalous or even criminal, in cultures as diverse as those of the Middle East and the Polynesian islands. Feeding the local poor was often considered an important duty by monasteries in Europe, while Sikh temples worldwide still offer free meals that every community member is expected to help prepare when they can. Strangers in many parts of the world can still be treated to a seat at the family table. As Jessica Kolhberger reports for Cultural Survival, island communities across the South Pacific continue to welcome guests with traditional feasts.

Food did not just play a role in helping to welcome strangers. The Food Timeline shows that the importance of cooking and eating in holding communities together is apparent throughout history. The Romans, Vikings and medieval Europeans all tended to eat in large groups, with extended families, friends and neighbours invited to eat together. Meals were often communal events with strict rules of etiquette that reinforced social structures while binding the community together. Harvest festivals are one of the best examples of shared meals encouraged the community to work together. The whole neighbourhood would often have to work together to ensure the crops were gathered in before bad weather struck, but they would be rewarded at the end of the season with a feast prepared from the fruits of their labours. Similar traditions of communal eating were celebrated around the world, and continue to be enjoyed today. Jewish families sit down together for the shabbat meal, Muslim ones break their fasts together with the fitr every evening during Ramadan, and even the most secular families often join together to eat at birthdays, weddings, or reunions.

Preparing and eating food together has been important across many different times and cultures. It has ensured that strangers were welcomed and fed on their journeys, and it has helped to bring communities together. The importance of sharing our meals remains strong in our modern culture. We still value the chance to eat with friends, family and colleagues, particularly on special occasions. The simple pleasure of working to create a good meal, and then sharing it with other people, can create bonds like those that the Ancient Greeks valued. We can harness the power of the communal meal to bring together communities in the workplace. A community that cooks and eats together, whether it is at home or at work, is a stronger one.