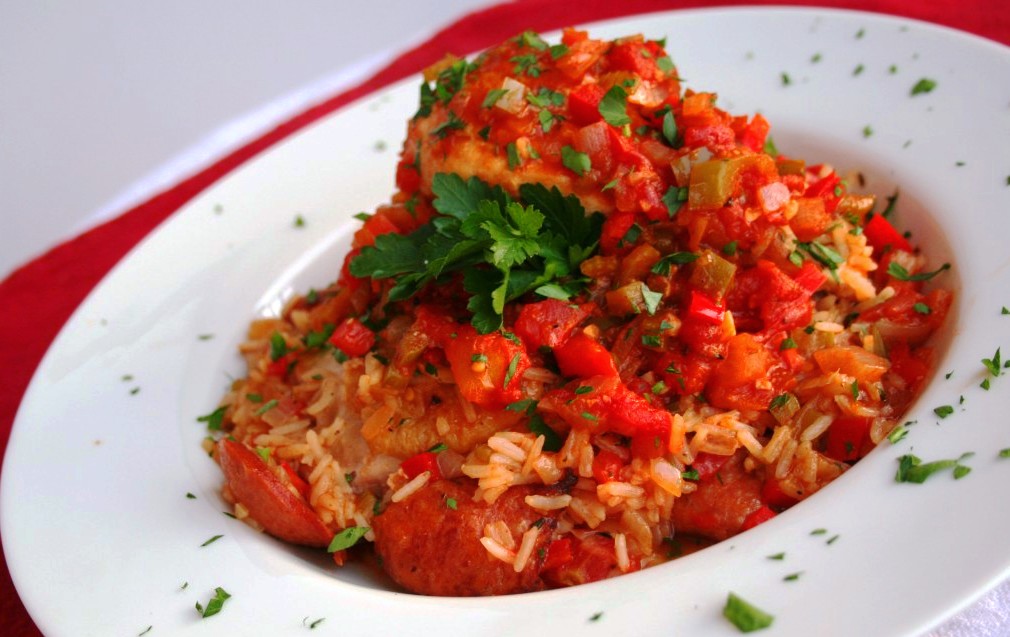 Posted at 18:59h in Recipes and Cooking Tips by Alex 0 Comments

The 4th of July (American Independence Day) is one of the American holidays I love most. Thanksgiving is the big foodie holiday, of course, but the thing I love about all American holidays is the way they provide a canvas for the great variety of regional cooking. While a stereotypical 4th of July barbecue may be hotdogs, hamburgers and corn on the cob, there are traditions that include (among many others) Chesapeake Bay Crab Cakes, Southern Corn Bread, Texas BBQ Ribs and even Jambalaya… many of which we explore in my 4th of July BBQ cooking class.

I love the word Jambalaya; it just makes me want to dance! Originating in the Caribbean with Spanish and Creole influences, it is similar to Spanish Paella but the main difference is in the cooking methods. Creole and Cajun cooking are indigenous to the Americas, particularly Louisiana, where the French Arcadians made their home and who, along with African slaves, blended spices and styles to create big flavoured rice dishes such as Jambalaya and Gumbo. (The name originated from marrying the French word jambon, for ham, with the old African Bantu word ya-ya for rice – jambon a la ya-ya.)

The great things about this dish are it’s easy to make for a large group, it’s fairly quick and you can substitute many different ingredients, as long as you get your spices right and you get the holy trinity of celery, capsicum and onion caramelised together so they marry well with the rest of the ingredients. Smoked ham or andouille sausage usually feature as the main ingredient, but anything smoky will do so the spice mix has something to latch on to. (One of my favourites is smoked rabbit!)

Try my recipe for Chicken Jambalaya below. Enjoy, and remember to try its cousin Gumbo the next time you want something from this part of the world. (Don’t you just love those names?!)

1.  Combine seasoning mixture in small bowl and set aside.

2.  Over med high heat add oil to large pot till smoking. Add 1 cup of each of the onions, celery and green & red capsicums; then stir in the seasoning mix, Tabasco and smoked ham.

4.  Add the remaining onions, celery and green and red capsicums and cook another 5 minutes stirring occasionally.

5.  Add the tomatoes and dried oregano & reduce heat and cook for about 5 minutes.

6.  Raise heat to medium and add the chicken and cook over med high heat for 10 minutes stirring occasionally.

7.  Stir in the rice and mix well.  Reduce heat and simmer 5 minutes.

8.  Add the stock, bring mixture to a boil; reduce heat to simmer covered over very low heat until rice is tender, about 15-20 minutes. Turn off heat.

9.  Garnish with fresh parsley and serve in individual moulds or on large buffet tray

Serves 8 –10 individual or 10-16 for buffet accompaniment