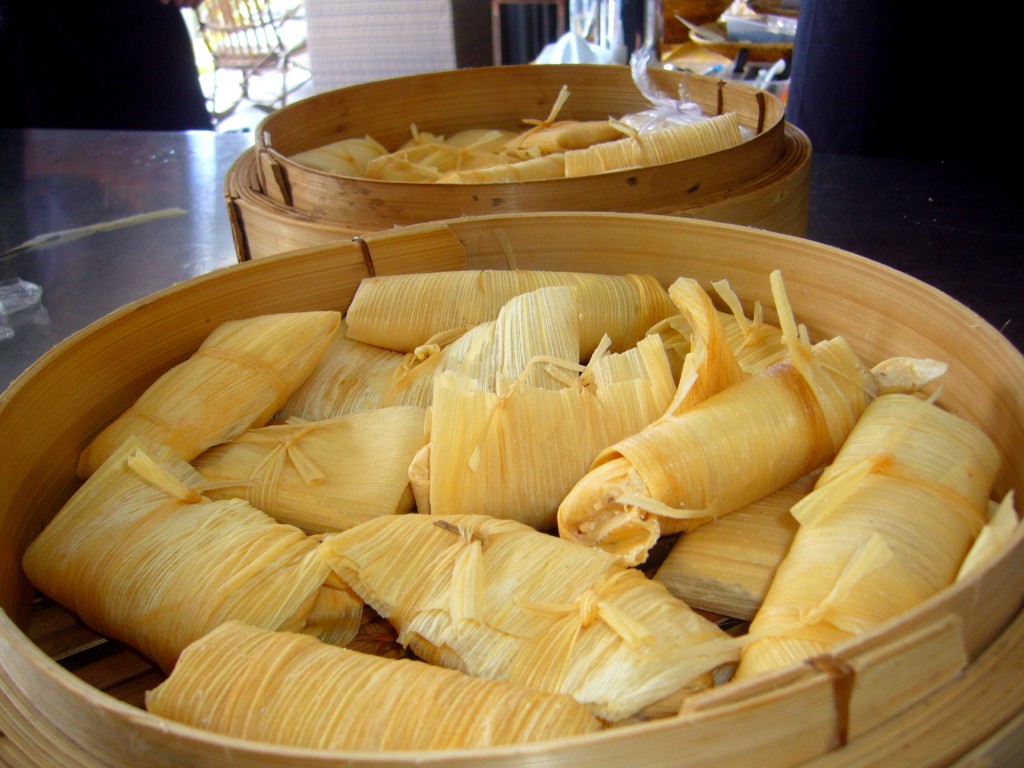 Posted at 14:15h in Recipes and Cooking Tips by Alex 0 Comments

In our Modern Mexican cooking class last week, everyone was excited to learn how to make tamales. I still remember one of my first experiences eating tamales – it was delicious. It was a hot day in Oaxaca, Mexico, as we strolled the swarming zócalo (market square). Merchants hawked trinkets and huge coloured balloons. Women with large trays balanced on their heads called out “chapulines”. Looking into their trays, I knew I was about to experience a bit of old Mexico. Chapulines are fried grasshoppers, a delicacy in Oaxaca, best enjoyed with a squeeze of lime. But the food that is unsurpassed in my memory were the wonderful tamales – freshly wrapped and steamed, filling the air with the soothing aroma of hot roasted corn. Tamales are a religious experience, so to speak, being an essential part of Mexican religious holidays such as the Day of the Dead, which is celebrated with gusto in early November. You also see them at weddings and most celebrations.

Tamales, sometimes called “little bundles of joy”, are usually filled with corn masa (masa harina) which is a very fine maize made from dried corn cooked with calcium oxide (known as lime water when hydrated). I have also seen these aromatic packages filled with mashed beans, quinoa (a grain), seafood and vegetables. They can be coloured with different varieties of corn maize or enlivened with chilli purées.

Tamales are a timeless food of Mexico, the American Southwest, Central and South America. Everywhere they are made differently and the flavours are unique. In the American Southwest and northern Mexico, tamales are stuffed and wrapped in dried corn husks – which have been soaked in water to make them pliable – then tied and steamed. In southern Mexico and Central America, banana leaves are most common as a wrapping. I have also seen tamales wrapped in avocado leaves and fresh corn husks. Other ingredients that make up a tamale are some liquid – usually stock, water or milk – and some type of fat. Lard is the fat of choice in Mexico, but vegetable shortening can also be used. The secret to light-textured tamales is to let the dough rest for one hour before preparing the tamales. The following recipe is a basic one to which you can add any filling you like, such as shredded roasted duck or chicken, or goat’s cheese. For a sweet version, add a pinch of salt, substitute milk for chicken stock, omit the corn and flavour with coconut. One of my favourite ways to enjoy them is simply with the fresh and zesty Pico de Gallo, which plays so well with the earthy flavour of the masa.

Serves 4 as an entrée or light lunch.

Note : Masa harina and dried corn husks are available from Monterey Foods and Fireworks Food in Sydney and Aztec Products in Melbourne. See my blog posts on these and other specialty suppliers.