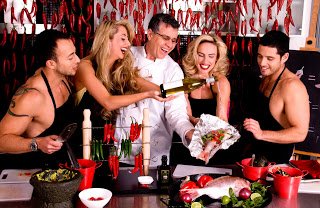 Posted at 00:15h in Cooking and Food News by Alex 0 Comments 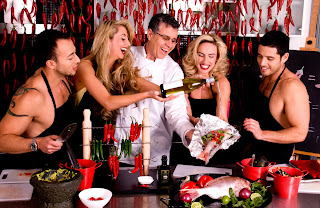 Just found out my entry for Shoot The Chef didn’t make the final cut but wanted to tell you what a great photo day it was got to be surrounded by top models as well as a wonderful photographer Edmund Chiu. Because of my chilli background of being crowned Chilli King back in the 90’s when I had my restaurant Rattlesnake Grill I thought a hot and spicy picture might be the way to go.

We got models Eduardo Santos, Diego Narvaez, Josephine Dillon and Marissa Nieves to work their magic in the photo with me and had a ball doing it. Hairstylist Donna Gennusa did an amazing job with the girls and Raymond Ware from CR13 made a beautiful set to photograph. So much energy goes into this type of photo and so much passion.

Drinking champagne, cooking fish, making guacamole it all went so well. Even though the photo wasn’t picked it still was a great day of meeting people and working with professionals that know how to capture a moment. I decided the shot was probably a bit too Hollywood for Shoot the Chef at the end as I know they like things a bit simple but we tried to capture my character which I think Edmund did very well. Maybe the sexy new food calander might be the way to go for this shot. What do you think? For those who don’t know Shoot the Chef is an annual photographer competition in Sydney, Australia where by a chef is photographed to capture the moment. Ain’t life grand?